Visit to Earthship in Fife

For several months now I have tried to arrange a visit to the Earthship in Fife. But the opening times were incredibly restricted, with the whole of August closed and in June and July it was only openend the weekends, and also not every weekend either.  Yesterday we finally made it to see the ecological building, and again it was closed, but we had come nevertheless and were able to walk around in the park.  A notice on the front door of the closed Earthship explained that it was due to a lack of volunteers. It was quite disappointing to realise that actually, nobody lived in the house like the ones in the US – in Fife it was basically just a pretty unused showcase it seemed, absolutely not representing the amazing enthusiasm and philosophy of its founder, which got me so fascinated with it in the first place when watching the documentary “Garbage Warrior” about the history of the Earthships and the realization of the sustainable living idea. 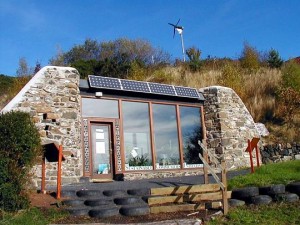 Afterwards, we went to Kirkcaldy – the town of parking spaces – and had a meal in a pretty new restaurant. The people there tried incredibly hard to establish the “Red Bar and Kitchin” and we were happy that they cooked from fresh with mainly local ingredients. Their pricing was also quite fair with the non-alcoholic drinks costing around a pound each.