We went and visited Scotland’s Secret Bunker the other day. I was really fascinated by the nuclear bunker in Fife, that I totally forgot to look at the exhibits in a critical way.  At the moment I am still wondering how much of the exhibition in the bunker was actually authentic or not, and if it is, from which time period. As the bunker was decommissioned in 1992 or so, but built in the early fifties, there are for example a wide range of red telephones from different decades on show.

However, it was very exciting actually seeing the bunker, which is based in the middle of nowhere near Crail, about two hours drive away from Edinburgh and South- East of St. Andrews.

It looks a little bit like a farmhouse from the outside.

However, the entry fee is now a little bit less than 10 pounds per adult person, but the canteen in there has good prices and is very lovingly preserved. The owners seem to put a lot of enthusiasm and energy into the attraction to make it exciting; it was nice to see an exhibition about the Scottish Campaign for Nuclear Disarmament included in the bunker.  I also have forgotten how the toilets smelled in the past; in the 70ies and 80ies when I grew up, it was taking me right back into my childhood to have smelled the bunker toilets and to use the extremely thin toilet paper in order for the pumps to be able to cope. I have totally forgotten that even the toilets made progress and became more powerful in the last thirty years.

I would have totally bought the story of the rooms being authentically been rebuilt, even though some visitor behind me was wondering what the German army rifle would do in the general’s command room if there wouldn’t have been a flag with a swastika been hanging in the communications room. Well, I guess the owners want to make the bunker attractive to all visitors, but that was going a bit too far for me – though they are possibly trying to cater more for people interested in military history at that point as they had a collection of army knives on show, too. In another room, they had a lot of East German army exhibits, which had at least thematically to do with the Cold War, but of course, had nothing to do with the bunker in reality either. 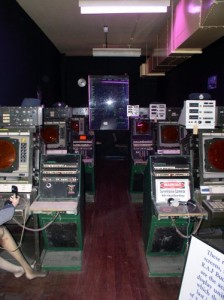 Though, in total, for me, it was really worth going there, as I have never seen anything like it, but am sure there are many more nuclear bunkers existing all over the world.  I would have liked to have heard many more personal testimonies of people who actually worked in the bunker or used it before it was given up, but as the Official Secret Act still applies, it seems the owners have difficulties finding people. There was only one short interview with someone who used it as a short term accommodation during some military exercise; to that point, I had never even thought about that there weren’t any showers in the bunker or that there wasn’t any food prepared in the bunker, but that it was brought in from the outside.

I was very fascinated by the red phones (with the sign beside it reading: early missile warning)  and the underground  BBC radio studio. 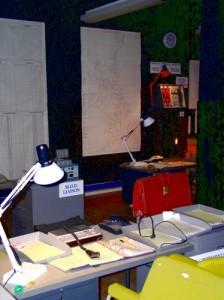