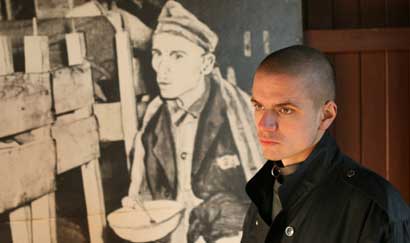 “But we want you to return home safely and with a sound mind to use in future for Freedom, Justice and Truth.”
So begins Rex Bloomstein‘s first feature documentary. Is the “sound mind“ the key to this film? The Holocaust can drive you crazy. The insanity of the realised idea of mass extermination, impossible to grasp and comprehend without losing yourself in the process, without asking questions of doubt about humanity. How do we deal with such a past? How can we still write poems?

How does the history of the Shoah affect us today? This is the main question of Rex Bloomstein’s  “KZ”. The film examines the effects of the concentration camp Mauthausen on all kinds of people today. And records their reaction without passing judgment. The narrative consists of interviews, mainly with the tour guides of the memorial site. Young volunteers avoid compulsory military service by opting for guiding tours through the former concentration camp instead. The local priest, the pensioners in the old people’s home, the local residents, the visitors, all are interviewed and asked about the relevance of the former concentration camp on their lives. The use of the historical site for the tourism industry is baffling. Then, the unexpected reactions of visitors and of locals catch our interest. The inspiration for this documentary is rooted in these reactions, as the director initially came across a partying guest house close-by to the concentration camp when he worked on “The Longest Hatred” eleven years ago and the stark contrast occupied his mind.

There is a nice slow pace to the film. It asks all the relevant questions but does not give any answers. It makes you think, reflect, learn and engage. It touches you deep inside.

Watching this documentary is important for us today to resist the use of the past as a reason for committing new atrocities and human rights violations.
So let us use our sound minds for freedom, justice and truth.