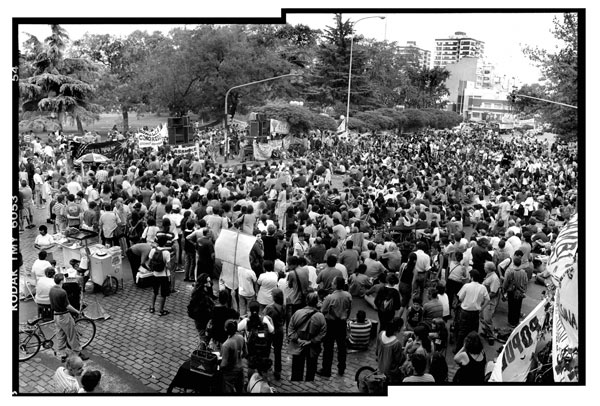 Another edition to Ulla’s crazy chaotic communal lively socio-political film shows certainly garnished with a roaring coffee machine and burrito delivery in the background. Even slightly too much talk in this film doesn’t matter as there is always action in The Forest Cafe with passers-by running through the audience in the search for the leaking toilets.
An upgraded, more conventional, focused and sorted presentation can therefore be experienced at the Quaker Meeting House. All organised under the Indymedia brand, this film is certainly not only about the news website Indymedia, but it is Indymedia live – the non-linear structure, organisation and narrative of the film is nearly as horizontal and non-hierarchical as the network, mimicking real life.

The film is a great example as a voice for the voiceless, but not as good as the trailer â€œEye of the Stormâ€, suggested.
It starts off brilliantly with Subcommandante Marcos holding a speech in the middle of the Lacadonian Jungle in Mexico, stressing the general importance of independent media, but then disintegrates a bit with raising a lot of philosophical and theoretical questions at the end. Some of these are rather interesting; for example on how media activists in the third world view the associated groups in the first, thereby raising the question of equality within the network and the world. The film does not give an introduction to the social movements, so it is primarily aimed at people who already know a bit about the dictatorship and financial collapse in Argentina, the occupied factories Brukman and Zanon, the Unemployed Workers Movement and their Picquatero road blockade protests, the Movement Sans Tierra in Brasil, Indymedia, the Zapatistas in Chiapas and the bloody police raid on the Indymedia Centre in the Diaz School in Genoa 2001 during the anti-G8 protests.
The film will also be screened at the International Human Rights Film Festival Document4 in Glasgow.