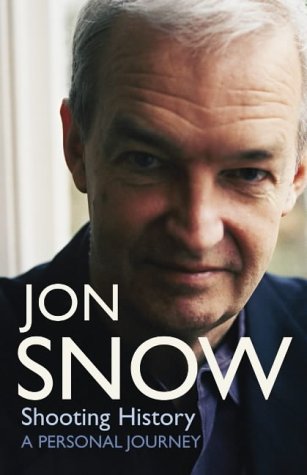 There are only few journalists today who are trusted by the public, and even fewer whose reports are trusted by anarchists. Jon Snow is one of the few. That might be because of his radical left student past. However, also Andrew Marr describes himself in his biography as something similar to having been a “marxist” once upon a time. So, do former leftists have a quality of trustworthiness and integrity other journalists fail to deliver? Does ideology and attitude of the journalist affect his status in the general population? Is the description “have been a lefty once upon a time” as much of a quality assurance as having smoked dope at university a generation time before reporting on a mainstream media outlet?

To tell the truth, after the catastrophes such as Hurricane Katrina, the earthquake in Pakistan and others, I dreaded the reports particularly of the American Channel4 correspondent.
If it would have been possible I wanted to shake him out of my television picture complete with sound as he sounded so superficial chewing-gum like, such as all US journalists.
In my opinion he is pretty disgusting. Krishnan Guru-Murphy seems occasionally up to Jon Snow’s job, specifically when he was reporting about the US attack on Fallujah, but for me it is the depth of humanity, the critical, rebel-like, biting attitude missing which Jon Snow has got. Krishnan Guru-Murphy seems just too professional a journalist, he seems like detached from the news, while as Jon Snow has got the most important characteristic a journalist can have; he personally seems to care about the people and issues he reports, and this integrity is apparent, appreciated and felt by the audience. And this is the most important treasure in the media world today – being able to care.

Originally though, i wanted to review Jon Snows Autobiography; “Shooting History”. At the moment I am stuck on page 290 and every paragraph is a battle against laziness. Has reading really got that strenious?
I seem to be attached to the television nowadays, and even though i still prefer autobiographies to biographies and novels to factual, the number of books I read seems to be declining month after month and year after year. Not that i buy less books, but i seem to be able to read less. The books I plan to read are stucked up on the side, and many i have already started to read, but switched to the next one after about page 20.
Though I actually don’t know if the amount I read is really less or just takes different forms, such as internet, emails, SMS, free newspapers and so on.

Anyways the autobiography. I like the pictures in the book. They help to illustrate the reports. I wonder about him travelling to Uganda and India that early in life that far! Here in Scotland in the estates, i meet regularly people who have never even left the British Isles, sometimes not even Scotland. In Germany the English and British we meet and also we met in other foreign countries such like Italy or when skiing in Austria were always incredibly polite, well-educated, well clothed and friendly.
Only after actually spending some time on the housing estates my picture of Britain changed totally, I suddenly discovered the lower classes of British society, the people who actually make the ordinary and average people of Britain, who are poor, smelly, badly clothed and can only afford a new tracksuit once a year, be ill with colds as they can not afford new shoes and the old are leaking when it is wet and rainy.
They might not even have a cooker, being told by social service to live of chips from the Fish’n Chips shop, if they want to eat something warm.
The difference of the image of the British in foreign countries and how the average British people actually live like, is far apart and detrimental.

Back to the autobiography; I am always keen to know how people in general manage to change and detach their political opinion from the one’s their parents hold. In my experience most of the times, political opinions seem to be inherited and passed on from generation to generation. Jon Snow’s change of political attitude from something like conservative to free ranging liberal lefty who avoids to put a label to his politics. That it is somehow lefty however can be seen in the rest of the books- reports about El Salvador, Nicaragua, Cold War influence, wanting to side with the oppressed against the oppressors- but often too- what exactly? – scared?, polite?, self-censored?, editor-intimitated? to actually flame the oppressor and demand accountability of them.
But maybe that is one of the reasons why he survived so long in this business.

However, his MI5 recruitment experience is certainly worth reading and mentioning, and a lesson to be learned for all journalists.

The history lessons taken from a personal viewpoint make a reader-involved account. How sad when the first liberation theorist pope, Albino Luciani, dies after just some 33 days after his election under dubious circumstances, with a refusal to allow an autopsy. In my opinion, that was a particular good report, as well as the report about the students seizing the American embassy in Iran.

“I should have gone to the Tiananmen Square massacre nine years before, but did not, in part because I was in mid-transition from ‘the road’ to the studio. In truth i had also allowed my America-centric, Africa, Middle East bias to get the better of me. Although I am the presenter of Channel Four News, I also have a strong if informal input into the editorial process. I can push to be sent somewhere, or push to have a story covered, or alternatively indicate a lack of interest which can at times lead to a story not being covered.”

I also liked the many other reports, it is like history in high-speed. Wush! From 2nd world war to 9/11 in 350 pages. It is less about journalism than about the events at that time, and this is well good so.
If there still are at least some lefty journalists, who still consider themselves to be on the left nowadays rather than it being a fault of youth 20 years ago, they should definitely read and celebrate and learn from the book.

There is another lesson to be learned from the book: Although conservatives can be incredibly narrow minded, many of them can have integrity and pride, too, even if it is only occasionally and it might turn-up in very odd issues and topics and rarely be relevant.
So, quite often, unfortunately, I have seen hard working liberal ex-working class people shy away and fail and give up their integrity because they were not brave enough to go the extra step to demand the impossible.
In such situations, upper class, aristocracy and arch-conservatives have a self-confidence which the career-climbing working class can only dream of.
May it be Margaret Thatcher to demand freedom of movement in Russia during her visit in the 80ies, or to tell Ronald Reagan to stop his Star Wars programm, or Sebastian Haffner’s battle and resistance against the nazis first due to recognizing the corruption of the legal system, or even the ex-aristocrat and founder of the Green party in Germany Jutta Ditfurth, sometimes, but only sometimes, members of the upper class can show necessary resistance to war and demand civil liberties where the well-meaning liberals and tolerant lefties fail and shy away because of feeling inadequate in comparison and longing for recognition and equality.
In this autobiography, sometimes it seems that Jon Snow’s conservative upbringing described in the book actually plays to his advantage- to be able to ask critical questions in a way that would make other lefties fail, basically coming down to the feeling of equality with his interviewees.

Reading on to page 291 there is the appearance of the Truth and Reconciliation Commission, and on nearly every page there are ethical questions from the past, important to the present. Above all, it is a book to learn from history for the future. On page 304 Jon Snow writes about the Lockerbie disaster:

“Satellite technology was providing us with raw pictures from the scene of the news quicker than we could get there to find out what was happening. I was in at the beginning of a new and potentially serious disinforming period in which I was expected to report events from the studio almost as if I were at the scene. It was to become ever harder for the viewer to tell whether we were actually witnessing what we were reporting, or were holed up in a video editing booth voicing over material fresh from the satellite.”

Later on he tells us about him objecting to an OBE.

Maybe I should add that I changed my mind about Krishnan Guru-Murphy, he seems to really hard try to report more social stuff, like what drug-addiction does to the kids and similar. Just wanted to point out in what aspects he seemed to come second after Jon Snow, but still he seems to be the runnerup being most poignant, interesting and sympathetic after Jon Snow, especially as I haven’t really paid attention to the other presenters much.