Review of SPITZEL – a book about undercover police agents

I have nearly finished the book Spitzel, which is a German book published by Assoziation A and researches police informants, snitches, narks, police spies, stoolies, and similar.
It is a very good book, particularly suitable for the London and British left revolutionary movements, which have the habit of accusing anybody they don’t like or who disagrees with their politics of being a police informer, without any evidence, any proof, and without any interest of providing or discussing the accusations, just for ruining somebody’s elses reputation and to get critical people out of their way. In this book, there is a wide collection of most famous cases of informers, starting with Judas and Christ, the accusations in Karl Marx&#8217;s paper versus Michail Bakunin of being a spying Russian police agent, of state agents and informers in the GDR, of the FBI’s COINTEL program against the Black Panther Party by killing Fred Hampton and George Jackson, Leo Trotzki’s writings and experiences to escape police surveillance, snitches in literature, such as Rosenkranz and Guildenstern in Shakespeare’s Hamlet.

The book is also interesting to introduce to different types of informants: undercover policemen, activists who are/were put under pressure and offered bribes if they pass on information, pollsters who overhear conversations e.g. in meeting places, particularly pubs, cafes and restaurants, police informants in prison, agent provocateurs, observers, and historical examples. However, there is very little on private agents spying for multinational firms, as e.g. it was revealed in the courtcase against the two protesters against McDonalds middle of the 90ies, that McDonalds employed quite some undercover agents to find out the motives and future behaviour of the group. Also, apart from the historical examples and some european overlap, there is very little about informers in other countries (except maybe the FBI&#8217;s program on the Black Panther Party).

In these book, additionally to the more extensive articles, examples are given about recent examples of mainly undercover police agents in the left scene in Germany and their field of work. Such as one woman, nice, friendly, helpfull, very well liked and reliable, and leading in anti-nuclear activities as well as the anti-EXPO protests in 2000 (which failed miserably), living in a political flatshare, and participating in germanwide antifascist gatherings. She revealed herself to a friend after her boss moved her to a different city and different tasks.
Another police agent revealed himself and another in July 1992 after his political girlfriend got pregnant and after the demomstrations to the World Economic Forum in Munich finished. They seemed to be particularly interested in anti-repression work and participated also in the Nicaragua solidarity group. 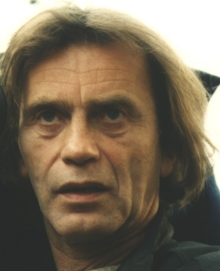 The most famous recent case is “Manfred Schlickenrieder” alias “Camus” (pictured). A famous case, because of being transnational; he was discovered by a group in Switzerland “Kein Friede” , worked also for the British agency of ex-secret service men “Hakluyt” for Shell spying against Greenpeace, and organised translations of italian magazines, as well as distributing and making lefty films, such as a documentary film about human right violations and oil in Nigeria in 1996. The Nigerian human right activist Ken Saro was executed by the Nigerian government in 1995. There was a report about the agent in the “Sunday Times”. Anyway, because of making films, he had nearly every activists face on tape, and he was active from 1976-2000, the documentary film archive was named “Gruppe 2” by this getting also lots of home adresses and access to nearly everything without having to reveal his own political position. He even made a film about the strike of the dockers in Britain. It is stated in the book, that Manfred Schlickenrieder alias Camus is the best documented undercover police informant and agent in the left scene in Germany.

However, it is astonishing and disappointing, that “Klaus Steinmetz” is missing as an example of a longterm (since 1982) police informer accepted by the political scene. He was discovered after the arrest of 1 and the murder of another underground Red Army Fraction member in Bad Kleinen in 1993. [Source 1 , Source 2]

So, in total, the book is very entertaining and gives a lot of revealing facts and examples , previously unknown or not yet paid attention to. The given URL’s should not have been included in the book, as most of these are unfortunately not working anymore. The style is quite dry, theoretical, educational and informative, as usual for the German left scene, but it is still worth reading as most chapters are short and precise, so to keep reading easy and straightforward. The book unfortunately does not give an easy recipe on how to protect against or to discover undercover police agents, and a word of warning is included in this book:

CAUTION: Reading this book can make you paranoid. Please do not read alone; talk and consult your mates when necessary.

In one review it is critisised, that the article about the STASI agent has just been copied unchanged out of a museum like documentary centre about the GDR, which has been set up and maintained most likely by the German state, however, personally I find it interesting to see how different undercover state agents for surveillance did their job, some enthusiastically, greedy and personally motivated, some writing rarely any report and if then with more “everybody in the office was totally pissed off for having to work overtime at the weekend” kind of style.

One particular fascinating example of being a police informant is Adolf Hitler. I did not know that so far, but I always wondered how a former soldier in times of great unemployment becomes a dictator, being voted to power by the public. Anyways, in this book it is explained, that when the Bavarian Council Government was declared by the communists in 1919 and the government by the socialists has been moving north. The president of the government Kurt Eisner is killed. And Hitler is worried of being thrown out of the army, as he hasn’t learned any job or skills, so he tries to stay on by becoming a military agent in the role of undercover informant, infiltrating political meetings to prevent another take-over of the government by any other political group. As the police informer also got the task to politically agitate in the meetings, they went on political training courses. Hitler’s boss Karl Mayr, will later have to flee to France in 1933 and be caught by the German army again in 1940 and killed in the concentration camp KZ Buchenwald in 1945.
And the political education course, which took place from 5th-12th of June 1919 at the University in Munich for the police agents, offered lectures and seminars on the “political history of war” , “socialism in theory and practise”, “the connection between foreign and domestic politics”, “our economical situation and the conditions for peace”.
One particular talk will be one of the sources for Hitler’s antisemitism. The antisemitism has been used by Hitler’s boss as a tool against revolutionary propaganda. So he also uses antisemitic pamphlets for the education of his agents, the writer(s) of these pamphlets often later hold leading posts in the NSDAP. The course also encourages the participants to hold talks and to argue about the presentations given.
And Hitler got the job to infiltrate the DAP, which he later transforms in the NSDAP.

Another example is the snitch Ernst Rambow, who passed on details of the Communist Party of Germany and the Socialist Party of Germany, when they were illegal during World War II, and members of both parties met up on 22nd of June 1944 to bring down and destroy the nazi regime. They were all executed before the second meeting. Through Ernst Rambow alone over 280 resistance fighters in Hambourg, Berlin, Landsberg and Hannover were arrested and imprisoned. More than 90 antifascists have been executed.

The article about the FBI’s counter intelligence program named “COINTELPRO” is particularly interesting to look at some of the methods used. It was a secret program to eliminate the Black Panther Party. They tried to divide and build fractions to stop confederations between groups. 2 maoist organisations were found by the FBI to divide unions and other left wing organisations. Death threats and burglary was used, runmour spread to dennounce certain people as bi- or homosexual, or to suggest they would have embezzled money, letters were sent telling members of the BPP that other members would be police agents, a fake informer report was placed in someone’s cars, people arrested but one released at once to suggest he would testify extensively, and the FBI had a police informer in the BPP, who tried to persuade the Panthers to become more militant and who gave vital information to kill Fred Hampton, for whom he was acting as security.

As an informative film, it is recommended to watch “Le Cousin” by Alain Corneau.
For books focussing on political detective stories, following titles seem to be recommended for reading to have an entertaining insight into the psychological and historical set-up for police agents.