It was like a promotion to have to go underground 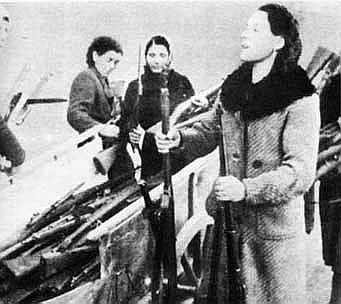 Milan 1943: Milanese women collect the weapons of the escaping soldiers.

Laura Polizzi, code name Mirka, comes from a family in Parma which fought against the fascists for a long time. It was two uncles, both in leading positions in the Communist Party, who introduced Laura into politics.

«After the dismissal of Mussolini, my uncle Remo and another relative moved in, they didn't feel secure anymore at theirs. Our house became the meeting point of the antifascist resistance. Many contacts arose from this time, like e.g. with Lucia Sarzi. She came from a family of actresses, who moved around the country, played theater and passed on antifascist Ideas. At the time I asked Remo to be allowed to enter the party. Pleased about my plan, but he rejected however, because I would be still too young. In addition, he and uncle Porcari are already members. Actually, our family is already tied too much in the resistance ».

Instead, Laura gets lesson in political economy and theory, reads Lenin's documents and practices the handling of weapons. After September 8th, the invasion of the German army, she gets permission to participate in the resistance actively.

«Then something wonderful happened to me. My uncle took me aside and said to me, I should from now on be available for the party. But I was so caught in my education, that I wanted to ask daddy first. He agreed and, since that moment, my new life started.»

Mirka continues to work as a shoe seller. In her free time, she takes part in meetings, is working as courier, works for the propaganda and organizes with other women and her sister a women's group.

«Working as a seller, I suddenly had to stop because I was reported by a work colleague. It is said, that she got 5000 Lire for it. When the police came to our home, they found my sister and uncle Porcari, both were arrested. My sister was then still under seventeen years old . But I was now, "burnt", and had to hide myself. I got a false passport later and left Parma. One should think, that it was terrible to go underground, however, I must say, I have accepted this. It was as if someone would have promoted me. I said good-bye to Daddy and Mom, of course with emotions and all this stuff, but I was glad, as from now on to be completely at the disposal of the party and for the resistance. And I went then, with the same order I already had in Parma, to Piacenza. To organize the defense groups of the women and to work in the area of propaganda. Anyway, also in Piacenza I only could stay shortly, because there I met soon afterwards an itinerant shoe seller who came from my former employer. The comrades held the opinion that it would not be advisable, to stay in Piacenza and sent me to Reggio Emilia ».

Mirka asked again and again to be allowed to go in the mountains with a military order. When somebody from Mirkas circle of friends was sent there, he told her the watchword word for the entry to the partisans. Although she is just entrusted with the important task to build connections between the Roman Catholic and the communist women's groups, she throws away everything to go in the mountains.

«I have thought it over, have pushed off to the mountains and not even alone. I have taken a group of teenager along, who always wanted to be in the mountains. There I was told, that I must actually be honored for my courage but need to be shot simultaneously because I had left my place».

After long to and fro an inspector achieves against the party that Mirka may be allowed to stay in the mountains -- as a vice-inspector. Her task consisted then in training partisans politically.

«I held this position only for a short time, though. Because I got then, in the meantime, engaged to the commanding officer, the military responsible. And the opinion was hold, that the commanding officer and the inspector could, by no means, have a relationship, because this would have undoubtedly disturbed the life of the guerillas to unrest. I wasn't particularly ready to accept this criticism, however I then have swallowed it anyway and have returned to the plain».

As Mirka goes to Parma, to fetch a couple of personal belongings out of her parental home, she got to know, that her parents have been arrested. The parents and both siblings were finally deported to the concentration camp Mauthausen.

«Everything was very tragic for me now. When I returned to Reggio, I wanted to hand myself in to the fascist. The comrades had been very frightened and locked me in for a week. I then calmed down but it was terrible. In the pain, everything was the way as if I would have never been away. I was given my tasks again, I have refreshed my contacts. But I was always searched for more intensively and the circle around me started to get narrower and narrower. Comrades were shot, with whom I had worked closely together. Briefly, living in Reggio started to get very dangerous for me. Therefore the party decided to send me to Milan».

Mirka experienced the liberation there. After this, she returns to Parma where also later her mother, her sister and her brother return. The father didn't survive Mauthausen.

Link to the original article in German: grossRaumzeitUng

Link to other articles in German: